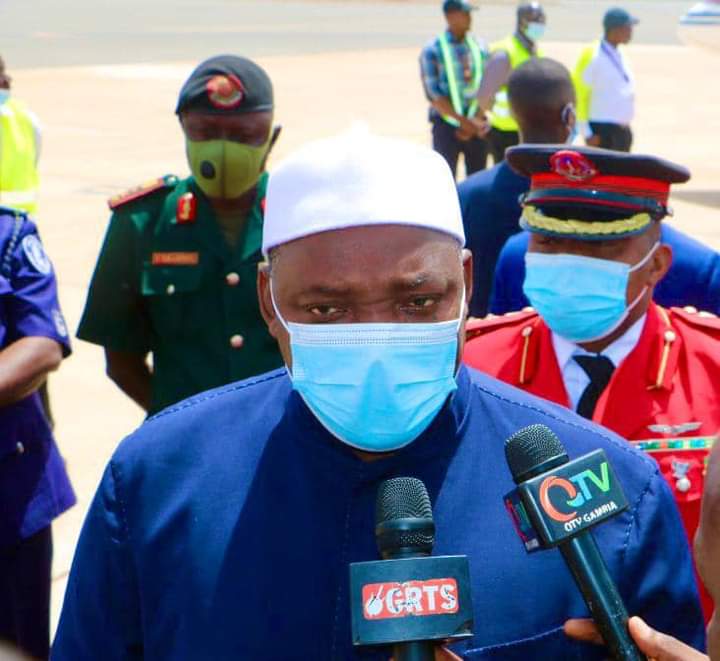 The President His Excellency Adam Barrow return's from Kinshasa the Democratic Republic of Congo, after a two working visit. President Barrow was received on arrival by the Ministers of Defense, the Interior and Service chief's. The Gambian Leader told GRTS at the Banjul International airport  that his visit the Democratic Republic of Congo was aimed at enhancing diplomatic and trade connection between the two countries. President Barrow underscored the need to strengthen and enhance diplomatic and trade ties with the Democratic Republic of Congo, noting the presence of a large number of Gambians in that country. Commenting on the steep rise in prices of basic commodities President Barrow said his government will continue to work closely with stakeholders in the sector to stabilize the situation. He used the opportunity to appeal to Gambian's to invest in Agriculture. He said his government has requisite policies and programs to transform the Agricultural sector thereby making it responsive to the food needs of the country. President Barrow also renewed commitments to expand and consolidate bilateral ties between Africa countries to advance trade, peace and development in the continent.Given the Gambia's geographic location, the President indicated that the countries could explore collaboration in aviation transport to make the country a hub in the aviation industry.

The President H.E Adama Barrow has urged The Gambian community in the Democratic Republic of Congo to be united and be worthy ambassadors of their country. President Barrow met with the Gambian community in Kinshasha during his two day working visit. President Barrow thanked the community for the warm welcome accorded to him and urged them to be united and not forget their country of origin. Responding concerns over the difficulty in renewing Gambian documents, The Gambian leader disclosed that government will dispatch immigration officials to various embassies across the world to enable Gambians access Biometric passports.President Barrow informed them that The Gambia has made tremendous progress in the last five years particularly in the areas of infrastructure and energy. He said The Gambia is on course to meeting universal electricity access by 2025, five years ahead of the global target of 2030. He finally informed them that his visit to Congo will impact positively on relations between the two countries, and would benefit Gambians there. He also commended his host President Felix-Antoine Tshsikedi TSHILOMBO for warm hospitality, urging Gambians to be law-abiding and peaceful.The President of the Association of Gambians in the DRC Bouna Batchilly told  President Barrow that the Gambian community is engaged in diverse activities across the two Congos expressing delight in receiving him in Kinshasa. He thanked the President for opening his doors to the community. The Vice President of the association Lamin Barrow said the Gambian community has seen a marked improvement in their fortunes due to what he called the improved security situation in the Congo. The Secretary General of the Association Mustafa Jallow, appeal to government to simplify the process of renewing their passports. The President of the Women's Wing Siandi Bassi also appealed to the President to support the honorary Consul who she said was very helpful to the Gambian community despite the challenges. The Minister of Foreign Affairs and Gambians abroad praised the Gambians in Congo for turning up under short notice to welcome the Gambian delegation. He assured government support to the honorary Consul who has been tireless in his responsibilities solely on voluntary basis.